So you already installed the system on eMMC or SD? You might want to use ZFS on the hard disk(s)! We assume rootfs is already on eMMC (or microSD Card) and you want to store your data on HDDs in ZFS pool.

This wiki does not cover root-on-zfs. (Although it should be also possible.)

If this method fails you can try to build directly ZFS on your system with the following instructions.

Go to Software and install headers. 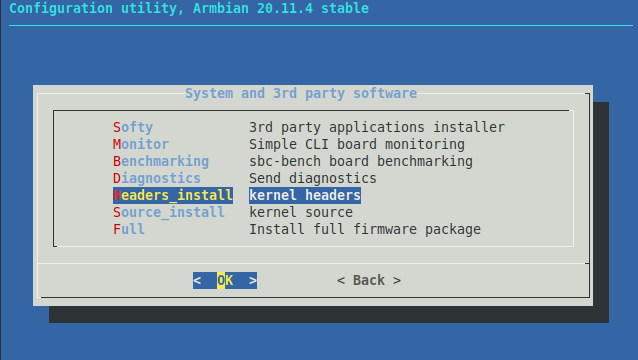 Once kernel headers installed, install ZFS with the following command:

Use fdisk of gdisk to create necessary partitions on your hard drive. This is beyond scope of this wiki. When ready look for assigned uuids:

Of course you may use more disks and create raidz instead of mirror. Your choice. :-)

Note: Do not use /dev/sdXY names. Use uuids only. This way your system will still work when you remove a disk or change order of disks.

If your disks are SSDs, enable trim support:

After reboot make sure the pool was imported automatically:

You should now have working system with root on eMMC and ZFS pool on HDD.